As summer rolls around again so do those unwanted hay fever symptoms like runny nose itchy eyes, congestion, and sneezing.

Now before we begin with treatments let's first check that it is actually a hay fever as I know that many patients are always unsure is it a cold? is it hay fever? so how do you know well to remember this question how long have you had your symptoms for? look at these symptoms

So hay fever is caused by the body reacting to pollen as if it was something harmful that was bad for our body and this reaction causes certain chemicals to be released and one of which is histamine. Now the histamine causes inflammation and it also causes the unpleasant side effects well, the symptoms that we know so well as hay fever. Now that was a super simplified version but I hope you've got a basic understanding of it all because it's really gonna help us when we talk about treatments So now let's begin.

Okay so we have three types of treatments and I feel like it's best if we break them down into what they're treating. So we first have general hay fever symptoms and you may have a mild version of all or just one of these now these are the only symptoms that you're experiencing then I see so many patients who find just an antihistamine. On its own enough to keep their symptoms under control and the way it works is in the name antihistamine.

So you know what histamine does and it basically blocks the action of histamine now you're probably thinking well which antihistamine should I take? generally speaking, loratadine and cetirizine are both quite good for general hay fever symptoms. there what we call second-generation antihistamines. So they're less likely to make you drowsy and it has a long duration of action so it's only once a day you need to take it. 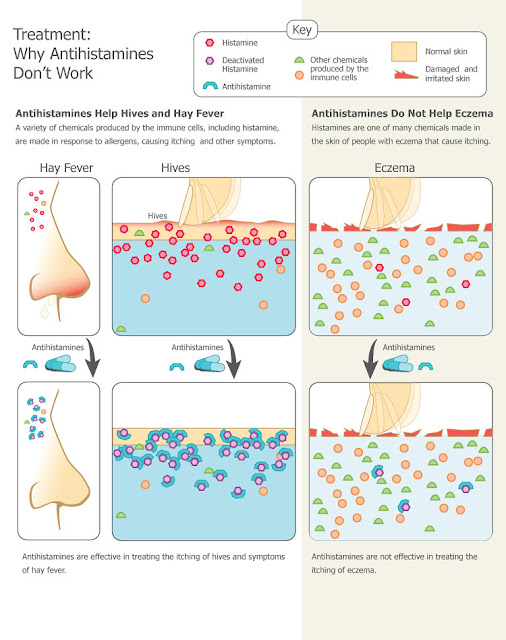 But your nasal symptoms are giving you real trouble you've got a runny nose you're sneezing all the time and the chances are you've probably blown your nose. So much it's gone all red and sore around your nose which isn't very nice. Now my go-to for these kinds of symptoms is a steroid nasal for example Beclometasone nasal spray it reduces the inflammatory response and it also helps control the allergic symptoms that are associated with hay fever. Now please remember though you will have to use this a couple of weeks before hay fever season starts for the best results. It can also be used with the antihistamine that I've just spoken about for general hay fever treatment.

Ok let's pause for one second now you may be thinking to yourself but Abraham I've used a nasal spray and it didn't really help me well first of all please double-check that it was a steroid nasal spray because there are many different nasal sprays out there in the market that claim to help with hay fever and allergies and a lot of them don't actually contain this.

So firstly check this and second of all are you using your nasal spray right because if you're not you're probably not going to get the right amount of medicine in the right spot and it's not going to be working as well.

But your eyes they're red they're water they're itchy it's just not nice. So remember the histamine that we spoke about at the start of the article well these are contained in cells called mast cells and what we're going to do is we're going to hit these with a mast cell stabilizer called sodium cromoglicate which is available as an eye drop so by stabilizing the mast cells. it's not going to release the histamine.

So we shouldn't get the allergic hay fever symptoms that were used to in the eye also sodium cromoglicate can be used with the antihistamines. I spoke about at the start now once again you may be thinking to yourself put Abraham I've already used an eye drop and it didn't really help me well.

Firstly I'd probably say please read the ingredients and double-check does that eye drop contain sodium cromoglicate because chances are it may not because there are a lot of different treatments out there that don't actually have this ingredient in them so please double-check. And also secondly are you using your eye drop properly because trust me a lot of people don't use them properly and thankfully not long ago I made a video on how to use an eye drop properly

which I will leave a link up here and in the description below now trust me if you use an eye drop properly I guarantee you, you will see a significant improvement and a significant improvement in results and please remember that with all medication always read the information leaflet to make sure that you're safe and suitable to take it and always speak to your pharmacist first so they can advise you what to take and again so they can check that you're safe and suitable to take it that's the most important thing also there are things that you can do lifestyle things that you can do that can help with hay fever as well

Tip number three once you've been outside and you've come back home go for a shower and get your clothes washed it washes off all that excess pollen that may have stuck to you, I really hope my tips help you I've also left loads more information in the description below which have advised everyone to read also if you've got any of your own tips to leave a comment below too because I'd love to read it and I'm sure everyone else would too always remember that you're awesome enjoy thesummer.

Popular posts from this blog

Top 10 Immune Boosting Foods You Must Eat For Optimum Health

August 04, 2020
Top 10Immune Boosting Foods You Must Eat For Optimum Health   H ello Health Champions . Today I want to talk about the immune system and the top 10 foods that can help it work better. We're talking about your body's capacity to defend itself so it's not like you have an immune system you are an immune system everything   about you participates in your ability to defend yourself.   You have 40 trillion cells and every one of them is doing their part. They provide physical barriers to keep foreign invaders out of the skin. The inside the lining of the lungs and so forth we have cell membranes that determine what goes in and out. The virus bacteria they have to get through and pass these membranes. We have mucus which is secreted off a mucous membrane to act as a barrier and trap foreign agents. We have chemical defenses. We have free radicals.   We have phagocytes that secrete toxic substances. That poison these foreign invaders to death. We have detoxific
1 comment
Read more

August 05, 2020
9 Basic Tips To Grow Your Hair Fast Naturally           W ant to know a secret? I know a natural way where you can draw your hair fast. Well ladies and gentlemen I know hair care is not easy. We've all seen old photographs of our mothers and grandmothers with long hair that goes down to their knees. It just seems unrealistic in today's times. We have extremely busy schedules in heavily polluted environments. And of course no patience. But isn't there just something magical about long hair don't we all crave for it? I used to struggle to get my hair growing. But now my hair grows up to an inch and a half to two every month. I have a secret that is effective natural and super easy and it works for everybody. I used to struggle to get my hair to grow it was slow and frustrating But thankfully in India, we have millions of natural remedies and I found what works best for me And I'm sure it works with you too. Now do something for me please go and grab a measuring
Post a Comment
Read more

HOW TO REMOVE PIMPLES ON FACE | NATURAL IN 2020

August 06, 2020
3 Effective  Tips  to Remove P imples  and P imple  marks On Your Face M any peoples asked me for the solution to Acne or Pimples problems which is a very big problem for teenagers. Whenever we had to go to college, fest, and farewell, so we got an enemy in our skin. Pimple will not come here and there, will here in front of our face.  So we can see it easily and can't hide it. And what we do for the pimples, we break the pimple, rub it and hide by makeup Pimple goes but leaves one of its marks. Pimple goes but comes with his 2 friends too. So friends may first tell you why we have pimples our skin consists of small pores and these pores are clogged with dead skin cells and dirt, which responsible for pimples Because of the hormonal changes in a teenager, Sebaceous Glands become more active. which is responsive to the Pores blockage, and hence become acne and pimples. #1 Steaming So today I am bringing for you, very Easy 3 Step remedy. And the first is Steaming For which we hav
Post a Comment
Read more